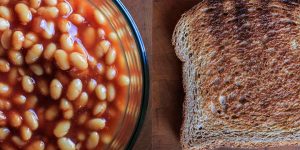 In my house beans & toast is also known as “what I eat after I’ve screwed up everything else“.
Last weekend I set out to make chocolate swirl buns — they’re just like cinnamon buns except you roll them up with chocolate, butter and sugar instead of just cinnamon and butter. I planned to freeze them and bring them out over Thanksgiving just so I could impress my two visiting nephews. What preteen boy would turn away a warm, gooey, chocolaty sweet? I thought I had a winner and was already practicing my acceptance speech for my soon to be awarded “Aunt of the Year” trophy. I thought the chocolate swirl buns would be talked about for years to come.
Not so much.
Something went terribly wrong in the kitchen and those buns refused to rise. After all the kneading, rolling and cajoling I ended up with 12 flat discs made of dough and chocolate. I went as far as baking them hoping and praying they would magically puff up in the oven, but they didn’t. They tasted like rope coils glued together with chocolate. So the buns went in the trash along with my dreams of Aunt Sainthood.
In an effort to redeem myself and salvage my tattered ego I decided to make pizza dough and was very excited to find a recipe for dough that didn’t require yeast. Ever the optimist I set aside my chocolate swirl bun defeat and geared up for round two and this time I was going to win.
But I didn’t really win.
Have you ever done something that you know in your heart isn’t that great, but you want so much to believe that it is? Like the time I decided to cut my own bangs and ended up with a 1/2 inch fringe way above my eyebrows. In my heart I knew I looked like a freak, but I really went out of my way to convince others that I thought they were great — “No, I meant to cut them this short. I think they look really cool!” —after which I would go home and cry into my pillow.
That’s kind of how I felt about the pizza dough. After all the effort to make it I can only describe the results as “meh”. It wasn’t the worst crust ever, but it was kind of like cardboard. Think frozen pizza or school lunch. However, I was so in need of a kitchen win that I almost convinced myself to blog about it, but would you believe that all the photos I took came out blurry and unfocused? It must have been some kind of divine intervention from the kitchen gods.
So now the pizza photos are in their rightful place on the cutting room floor and the buns have a new home in the trash can, which brings me back to the beans & toast.
I eat this a lot more than I like to admit, but gosh darnit it’s so good.
It’s especially good when you’re feeling a little down in the dumps after destroying your kitchen and having no delightfully wonderful baked goods to show for it. 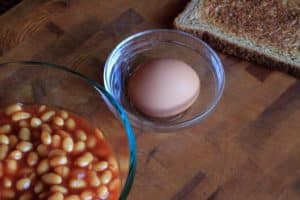 It always comes out right — just toast some bread, heat up some beans and fry an egg.
Voila… instant savory comfort food for the soul. 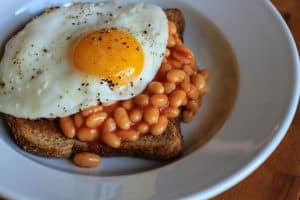