These easy mini cinnamon rolls are the easiest way to get a cinnamon roll fix! All you need is some store-bought dough and a few minutes to prep them for the oven.

There are some convenience food items I can’t resist and pre-made crescent roll dough tops the list. As much as I love to cook from scratch sometimes a girl just wants a cinnamon roll without all the dough-making drama. All the stirring, kneading, rising, rolling, praying and crying is a little too much to handle sometimes. That’s when I summon up the kitchen spirit of Sandra Lee and break out a package of store-bought crescent roll dough.

Some people might scoff and say “Store-bought crescent rolls? No, thank you!” I feel sorry for those people because I bet they haven’t had a cinnamon roll in a long time. I made some from scratch about six years ago and, yes, they were heavenly, but I haven’t made them since. Why? Because they take too much time! For special holidays I’m willing to roll up my sleeves and make some from scratch but on a regular Saturday? Heck no, pass me a can of crescent roll dough, please.

And I realize you can buy cinnamon roll dough in a can, but they are often cloyingly sweet with lots of sugar and cream cheese frosting. These crescent roll cinnamon rolls are sweet, but not overwhelming so and have just a light drizzle of glaze. So, if you want all that cinnamon-y and buttery goodness, but don’t have the time or patience to make rolls from scratch give these quick & easy mini cinnamon rolls a try. I think you’ll be glad you did. 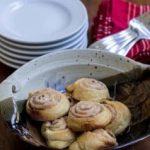 These mini cinnamon rolls are quick and easy thanks to store-bought crescent roll dough.