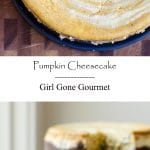 Rich and creamy pumpkin cheesecake with a gingersnap crust. This is a decadent way to switch-up your Thanksgiving dessert plan!

Thanksgiving is just a few days away here’s one last idea in case you’re scrambling to figure out your dessert plan. Sure, everyone loves pumpkin pie – it’s a Thanksgiving classic – but what about pumpkin cheesecake? It delivers a wonderful pumpkin flavor and is all dressed up as a rich and creamy cheesecake. Oh, and the crust – no one will miss the pumpkin pie when they get a taste of the gingersnap crust, which is way easier to do, by the way – no rolling pin needed!

A few years ago my good friend, Toni, shared with me her family’s cheesecake recipe, which is so delicious, so, after getting her blessing, I adapted it:

This recipe produces a towering cheesecake, but don’t worry if you can’t stretch the crust all the way up the sides of the pan – after the cheesecake sets overnight in the fridge it’s very stable, so there should be no worries about it collapsing.

It feeds an army, so if you have a lot of guests for the big day there is plenty to go around. Or, if you’re only cooking for a few folks, you can keep the leftovers in the fridge for up to a week.

Before we jump to the recipe here’s a quick round-up of my Thanksgiving recipe ideas — over the last few weeks I’ve shared a super tasty onion dip, goat cheese stuffed mushrooms, decadent dark chocolate pecan bars, and green beans a go go. It’s been so fun sharing them and I hope you try them out! 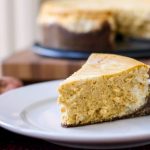 A rich and creamy pumpkin cheesecake!