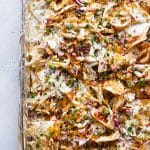 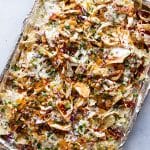 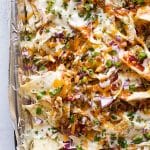 If you’ve ever been disappointed by restaurant nachos, you should definitely make your own at home. These BBQ chicken nachos are loaded with tender chicken, BBQ sauce, and a super simple homemade cheese sauce. I use several shortcuts like rotisserie chicken and store-bought sauce so they’re easy to make. You’ll never order nachos at a restaurant again!

I don’t tend to throw stones when other people cook for me (I usually err on the side of gratefulness), but when those other people are employed by a restaurant charging higher than necessary prices I tend to look around for some figurative rocks when my expectations aren’t meant. Case in point: nachos. There is nothing more disappointing than poorly executed nachos and, unfortunately, I’ve had some bad nacho experiences.

Partially melted cheese, thoughtlessly assembled layers, cold toppings that are supposed to be hot, and stale chips are only a few offenses I’ve encountered. When you can’t pull a single chip from the pile because the cheese has melded a bunch of chips into one rubbery mess that’s when you lose me. I’m sure there are many reasons for these issues (stressed staff, busy kitchens, and too much time under a heat lamp are probably a few) and all of those reasons are reason enough to make your own nachos at home. In this case, BBQ Chicken Nachos, with all the toppings.

These easy chicken nachos are a super-sized appetizer, snack or even dinner that are perfectly layered and fully loaded with tender chicken, BBQ sauce, creamy cheese sauce, and shredded cheese. And (bonus!) they are not complicated to make. Make them for game-day, make them for a party or make them for a random Friday night. You’ll never go out for nachos again.

There are a few things that make these chicken nachos a breeze to make: rotisserie chicken, store-bought BBQ sauce, and a super-easy cheddar cheese sauce that takes about five minutes to make. Short-cuts are our friends!

Even though you buy one hot, you can pop your rotisserie chicken in the fridge (keep it wrapped or in an airtight container) and it will keep for three to four days.

When you’re ready to make the nachos just pull the meat off the bones, discard the skin and shred the chicken with your hands. If your chicken is hot use two forks to shred it.

If you have an old family recipe for the best ever BBQ sauce, by all means, make a batch for these nachos. Also, will you send me the recipe?

For the rest of us, use your favorite store-bought sauce. My go-to favorite is Stubb’s Original, but use what you like.

The only cooking we’re doing (besides popping the assembled chicken nachos in the oven) is this creamy white cheddar cheese sauce. You need four ingredients and less than five minutes to make it…

Once you have your tortilla chips, shredded rotisserie chicken, BBQ sauce, and cheddar cheese sauce prep the rest of the toppings:

Now for the fun part: assembling the BBQ chicken nachos. With all the drizzling it helps to channel your inner Jackson Pollack 🎨

Grab a large sheet pan, line it with foil and you’re ready to go. It’s not rocket science, but here’s how I layer my nachos so every chip has a little bit of all the toppings…

One more time for the cheap sheets!

Bake the nachos: Pop the sheet pan nachos into a 375°F oven and bake them for about 10 minutes or so. Check on them and once the shredded cheese has melted and the top layer of chips are toasty they’re ready to serve. I like to squeeze some fresh lime juice over the top along with some chopped parsley.

How to Reheat Nachos

These nachos are best hot from the oven, but if for some reason you have leftovers you can reheat nachos in a 300°F oven until the chips crisp up a bit and the cheese is warmed up.

If you’re like me and more into the food than the game at game-day get-togethers you might like to try these other snacks and appetizers, too. 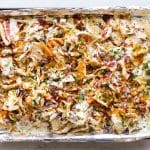 These BBQ chicken nachos are loaded with tender chicken, BBQ sauce, and a super simple homemade cheese sauce. I use several shortcuts like rotisserie chicken and store-bought sauce so they’re easy to make. These nachos are great for parties, game-days, or just your average Friday night 🙂

For the Cheese Sauce