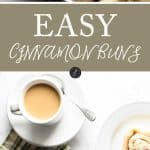 Homemade cinnamon buns made with a quick-rise dough are a wonderful weekend treat.

Five months ago I moved into this house and it’s starting to feel like home.

Pictures, left stacked against the wall for months, have found places on the walls. Knick-knacks and photos, plunked on the mantle with little thought, now reflect a bit of order and style after some strategic arranging. A long-lost bag of funky magnets surfaced and I stuck them all on the side of the fridge.

There’s still things to do, but, this house, it’s starting to look like me.

It’s a bittersweet feeling, all this nesting and settling in. It’s an acknowledgment of where I am now, that I am here, and I’m making my way on my own. But it signals the end of a chapter, the turning of a page, a closure on the past. It’s an ending and beginning all at the same time.

So there are pictures up and other little tell-tale signs that I live here, but nothing says “home” to me more than the scent of cinnamon buns warm from the oven on a Saturday morning. And so it was last weekend, in the space between my first cup of coffee and taking Feynman to a doggy swimming class (<– yes, there is such a thing) that I made these warm cinnamon buns drizzled with a sweet sugar glaze.

I fiddled a bit with Martha Stewart’s recipe for a basic pizza dough, a recipe I mentioned a few posts back. It takes what can be a labor-intensive exercise in dough making (mixing, kneading, rising, kneading, rolling and rising again) and shortens it so that, in the space of about an hour and half, you can have tender warm rolls on your morning breakfast table and still have time to get to the other demands of the day.

For us, that was a swimming class. It’s the sort of thing people do who treat their dogs more like children, like yours truly. He’ll be two years old in August and in his short life he’s yet to jump in the water and swim. I figured it was time to take action and, instead of tossing him off a pier into a freezing cold lake and hoping for the best, I opted for an indoor swimming class complete with a trainer and an adorable red doggy life vest.

Long story short: he didn’t swim. He did get his feet wet, but tempting hot dog treats weren’t enough to lure him further into the water. He was happy to just splish-splash in the shallow end and watch his classmates take the plunge. It was sort of like taking a kid to Disneyland for the full magical experience only to realize he just wanted a stuffed Mickey Mouse, a toy sitting on the shelf back home at the local Disney store. With Feynman, getting his toes wet was enough and something we could have done for free at our local park.

But it’s okay. In so many ways I’m just starting to get my feet wet, too, so I understand his hesitation. Sometimes baby steps are the biggest steps of all. They indicate a want inside us that’s big and unknown. Taking those initial steps, like hanging pictures or dipping our toes in the water are important. And, next time, we’ll take a few more.

And so will I. 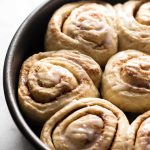 This dough recipe, adapted from Martha Stewart, requires very little hands-on time and just an hour to rise. They’re lightly spiced with cinnamon and sugar and topped with a drizzle of a simple sugar glaze.