This post is sponsored by La Farm Bakery in partnership with NC Blogger Network. I received free product in exchange for sharing my experience learning about artisan bread. Thank you, Lionel Vatinet, for sharing your passion for baking and for inspiring today’s post and crab salad sandwich recipe.

There’s been a lot of bread in my life lately. A few thick slices of french toast, a couple pieces alongside my beloved eggs in purgatory, and cold crab salad sandwiches all produced from a single loaf I was given when I visited La Farm Bakery.

Or, I should say, the newly opened second La Farm Bakery location. The first location, opened in 1999, still operates in its original space tucked inside a nondescript strip mall. What started as a small operation has grown into a full-service bakery, a cafe offering up breakfast, lunch, and dinner, a food truck, and, now, a now a roomy downtown baking facility that has a walk-up counter where customers buy loaves of bread, freshly baked pastries, and other sweet treats. Within view of the customers, a  staff of busy bakers hand-shape the artisan bread that customers line up for, just as they’ve always done for the last 18 years.

For almost an hour I watched Lionel Vatinet (who owns and operates La Farm Bakery along with his wife, Missy) slice his way through a table full of bread each with its own flavor, aroma, and personality. Like a sommelier who sings the virtues of wine, he explained the differences between each loaf, what grains were used to make it and how each is shaped by hand. As baskets of bread were passed around for us to taste, he advised us to first hold the slice and give it a gentle squeeze to release its rich aroma.

As I listened to Lionel while sniffing and tasting the bread as directed, I couldn’t help but chastise myself. I’ve lived here for a year and have often complained that it’s too suburban with too many chain restaurants and big-box retailers. And now here I was, not far from my house, learning about bread from a master baker (he’s a graduate of the esteemed Compagnons du Devoir in France) and a 2015 James Beard semifinalist for Outstanding Baker. Sometimes experiences happen for a reason and, in my case, the bakery tour was a reminder there’s a lot to see and do just out your front door. You only have to look past the giant discount store to find it.

And the tour was interesting, but it was Lionel’s connection to his heritage and community that I found most inspiring. In the hour and a half he spent with us he often paused to greet customers and introduced some of them by name. Between the heady scent of freshly baked bread and Lionel’s charming French accent, it was hard not to imagine we had somehow transported to a small village in France. Instead of climbing into my car when I left, I thought I might jump on a bike with a loaf of bread in the basket and pedal home. There I would make bouillabaisse and serve it with hunks of crusty bread.

But, like all daydreams, this one wore off. I didn’t get around to making bouillabaisse, but I did make a simple crab salad sandwich. The salad is cool with crunchy bites of celery, fresh herbs and a squeeze of fresh lemon and sandwiched between two slices of crusty bread.

And when I’m ready for another French-inspired reverie I know exactly where to go. 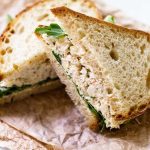 This sandwich is simple because it’s mostly about the bread, so use the best crusty loaf you can find. If crab isn’t your thing, substitute chicken or tuna – it all works well.

Nutrition estimate does not include the bread.