Cassoulet is a classic French meat and beans dish that, made in the traditional way, can take five days. This slow cooker cassoulet recipe uses smart shortcuts to whittle the time down to just two days, with very little hands-on work. It’s best served on a cold night with plenty of toasted bread to soak up all the delicious flavor.

Just over a year ago I made beef bourguignon which, at the time, was my culinary Everest and when it was over I asked myself,
“What’s next?” That question led to my Better Know a Mother Sauce series, french onion soup, tartiflette, and, now, the classic French dish of slow-cooked meats and beans called cassoulet.

As with most things French I started with Julia Child but stopped cold in my tracks after discovering her recipe for cassoulet takes five days. Five days? Even for someone like me who loves to cook and isn’t afraid to dig in and commit to a recipe five days is excessive. I mean, I have a dog, a boyfriend, a job, and an unhealthy fascination with our current Presidential election that has me glued to CNN every night. I just don’t have five days to make Julia Child’s classic cassoulet. I don’t care how good it is.

And it’s not just the time commitment that’s the issue. Traditionalists argue that cassoulet must have duck confit, it must be baked in a special dish that allows a special crust to form on top, and it must have dried beans that have been soaked overnight. That’s all fine and good, except my local grocery store doesn’t sell duck confit, I don’t own one of those special dishes, and I didn’t want to deal with the whole dried bean issue.

Here’s what I did instead…

I used ingredients available at my local grocery store.

No duck legs? Substitute chicken drumsticks. No pork shoulder? Use pork belly instead. The moral of the ingredients story is to use whatcha got and call it your own.

I used my slow-cooker.

If Mark Bittman thinks it okay, then I think it’s okay.

I admit this was a risk. Anytime you slow cook with canned beans the chances of the beans disintegrating is high. So I didn’t slow cook them.

Instead, I did the slow-cooking without the beans and only added them after the meat had cooked for several hours and before chilling the cassoulet overnight in the refrigerator. This gave the beans a chance to take on all of the porky/chicken flavor while keeping their shape. Worked like a charm.

As far as the crust goes, modern recipes call for a breadcrumb crust, but I went an easy route and just toasted up some bread lightly brushed with olive oil and fresh herbs. The bottom of the bread soaks up all the sauce while the top stays crisp and toasty.

In the end, I cut my cassoulet time down from five days to two days, with only about an hour of actual hands-on time.  My short-cut cassoulet is a reminder that, while I might strive to cook according to tradition, sometimes it’s just not possible and it would be a shame to skip these classic recipes because they take too long, or have hard-to-find ingredients, or because someone somewhere insists you “have to make it like this”.

My slow cooker cassoulet might not be traditional, but it worked for me. 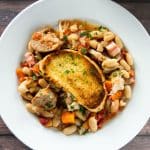 Cassoulet is a classic French dish that, made in the traditional way, can take five days to make. This recipe uses some smart shortcuts to cut the time down to just two days, with very little hands-on time thanks to the use of a slow cooker. It’s best served on a cold night with plenty of toasted bread to soak up all the delicious flavor.

For the Toasted Bread

Depending on what’s available at your grocery store you may or may not find pork belly. Try using the same amount of pork shoulder if it’s available.

If tomatoes are in season use fresh ones, but be sure to core them first. I used boxed chopped tomatoes (Pomi brand).

Salt pork is usually located in one of two places in the stores I shop at – either near the pork in the meat section or near the bacon. If you can’t find it, substitute the same amount of pancetta or bacon, but understand that it will change the flavor a bit.