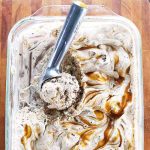 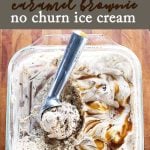 No ice cream machine? No problem! This no-churn ice cream is rich and creamy – plus, you can customize it however you like. This version has homemade caramel sauce and brownie bites making it a decadent summer treat.

A few weeks ago, I was preparing for a long two-weeks away and preparations included, among other things, laundry, giant suitcase packing, and a turbo-charged cooking fest in order to make and photograph recipes to share while I was away for work in California. Now I’m finally here at the end of the trip to share this decadent caramel brownie no-churn ice cream and it feels like I made and photographed it a million years ago.

It’s been a long two weeks and some ice cream is totally in order.

Did you know you can make creamy rich ice cream without an ice cream maker? I know – I was skeptical, too, but it’s true! The best part? It’s not difficult to whip up a batch – it’s almost too easy, which means a big bowl of ice cream is just within reach. Plus, once you know how to make the no-churn ice cream base you can customize it however you want.

You only need three simple ingredients…

Combine the condensed milk with the vanilla. In a large bowl whip the cream until it holds soft peaks and then gently fold the whipped cream into the condensed milk. Folding it in ensures you don’t lose all of the air that was created when you whipped the cream.

At this point, if you want the ice cream plain, all you need to do is transfer it to a container and freeze it for at least six hours. Or you can fold in some ice cream add-ins – I did brownie pieces and caramel sauce – and then freeze it. 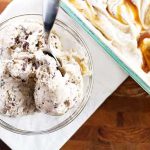 No ice cream machine? No problem! This no-churn ice cream is rich and creamy – plus, you can customize it however you like.

I made brownies and caramel sauce to fold into the ice cream, but you can substitute your favorite ice cream add-ins!

For the Caramel Sauce

For the Ice Cream Base

Make the Ice Cream Base