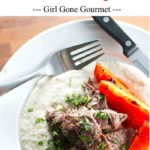 A restaurant-inspired dish of grilled steak and red peppers served with a rich and creamy eggplant puree. This dish is simple, fresh, and satisfying.

Many months ago I spied a dish called Sultan’s Delight on a menu at a restaurant called Talullas. I was so taken with the name (so mysterious and decadent sounding!) that I skimmed the description and placed my order confident that if it was good enough to delight a Sultan it would certainly delight me, too.

I expected a complex dish, but was served the opposite – in front of me was a plate of velvety smooth eggplant puree topped with grilled steak and perfectly charred red peppers. It was simple, fresh, and incredibly satisfying.

It was, in fact, delightful.

After some research on Epicurious it turns out it’s not that hard to make at home, so I recreated it in my own kitchen. You never know when a Sultan might stop by (fingers crossed!) so I’m now prepared – you know, just in case.

How to Make Eggplant Puree

It all starts with an eggplant and three simple steps –  grill it, soak it, and mash before combining it with a simple bechamel sauce. Traditional recipes have you top that velvety smooth eggplant puree with braised lamb, but I followed the example set by Tallulas and went the grilled steak route. It just felt right for this time of year.

So a Sultan may not stop by anytime soon, but that doesn’t mean we can’t delight our friends and family with this dish when eggplants are at their peak this summer. The rich eggplant puree is so delicious with the tender grilled steak and fresh red peppers that are grilled just long enough to get a smoky char. It’s deceivingly complex and sure to impress. I hope you give it a try!

Traditional Sultan’s Delight is made with braised lamb. However, this version is inspired by a favorite restaurant, Talluja’s in Chapel Hill, NC, where they pile grilled steak and charred red peppers on top of a traditional eggplant puree. This dish is simple, fresh, and satisfying.