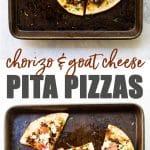 Make these simple chorizo and goat cheese pita pizzas for a light dinner or as an appetizer for four. They only take about 20 minutes start to finish!

Updated from the archives. First published in August 2009

Sometimes the best things come from seemingly mismatched odds and ends that, together, turn into something delicious. Take, for example, some pitas topped with warm Mexican chorizo, creamy goat cheese, and fresh grape tomatoes. It’s not a combo I would have come up with during an official sit-down recipe planning session and only came to be as I stood in front of my fridge in a desperate attempt to avoid ordering pizza for dinner. Spontaneity is often the catalyst for creativity and, in this case, I ended up with something much better than pizza delivery.

As is, the recipe serves two for dinner or maybe four as an appetizer but with extra ingredients, there’s no reason you can’t pop an extra baking sheet in the oven and double the servings to stretch it out a bit. For me, it was a simple dinner on a Saturday but I imagine these would go over well as a game-day snack or as tasty bites for a small holiday get-together along with glasses of crisp white wine or a margarita wine spritzer. 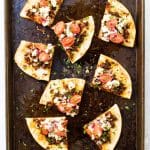