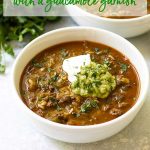 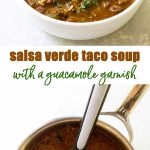 Salsa verde taco soup made with fresh tomatillos, green chile, brown rice, and ground beef. This is a small-batch recipe for two that you can make on the stovetop or in an Instant Pot. It’s garnished just like tacos with a dollop of sour cream and a quick and easy guacamole.

More often than not these days I make soup in smaller batches. I’ve tried in vain for years to store and reheat leftovers with every intention to leverage the leftovers for easy dinners and lunches only to not do this and end up tossing it all out months later when I can’t figure out what, exactly, I put in those storage containers. So, small-batch soups that serve two to three seem to be my sweet spot. Enough for today with maybe some leftovers for lunch tomorrow.

And this salsa verde taco soup is just that: a small three-serving pot of goodness topped with a quick guacamole and dollop of sour cream.

Just like tacos except in soup form because the next best thing to a taco is a dish inspired by tacos. Plus, I am including on the stovetop instructions and instructions for making it in an Instant Pot (!), also known as the newest addition to my kitchen gadgetry collection, but more about that in a moment. Let’s talk ingredients first.

This taco soup is about an hour-long adventure with most of that time being of the low-maintenance type while the soup simmers or pressure cooks depending on the method you choose. There’s some chopping involved to get the ingredients ready to go, but from there it’s a one-pot dump and stir operation.

And, really, the steps involved are mostly the same whether you choose to go with the stovetop steps or the Instant Pot ones up until you add the rice. From there the road forks and the experience is different depending on which route you choose.

On the Stovetop: With the stovetop, we are in familiar soup-making territory following a similar pattern:

Instant Pot Instructions: I’ve been playing around with my new Instant Pot, also known as a pressure cooker, for the last couple of weeks and so far I really like it – it’s sort of like a slow cooker in fast forward. I’ll be sharing a separate post sometime next month all about my Instant Pot, so if you’re interested in buying one stay tuned. If you already have one here’s how I used it to make the soup:

One note: the soup actually takes a little longer to cook in the Instant Pot than it does on the stove because of the time it takes the pot to get to pressure. But, unlike the stovetop method, once you secure the lid and set the timer you can walk away from it – no babysitting or stirring required. So while it takes a little longer, it’s completely hands-off time.

The soup has a bright acidity, thanks to the fresh tomatillos and the squeeze of lime, that balances nicely with the richness of the beef. The recipe makes three generous servings and it’s the kind of soup that easily stands on its own as a main course. Plus, because it’s a small batch, you don’t need to worry about finding the frozen leftovers in the back of your freezer next year and that, as Martha Stewart would say, is a good thing. 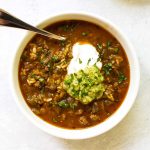 Salsa verde taco soup made with fresh tomatillos, green chile, brown rice, and ground beef. It’s a small-batch recipe for two that leaves you with just enough leftovers for lunch the next day. I’ve included instructions for both the stovetop and Instant Pot (see notes). And, just like tacos, the soup is garnished with a quick and easy guacamole and a dollop of sour cream because I believe every soup needs a great garnish.

Nutrition Notes: The estimates are for the stovetop method, which calls for a different amount of stock than the Instant Pot instructions. Also, I used grass-fed beef and store-bought organic vegetable broth. Depending on the products you use the nutrition estimates may vary.