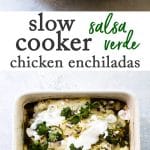 These salsa verde chicken enchiladas have homemade salsa verde, Monterey jack cheese, and are garnished with sour cream and red onion. The chicken and salsa cook in the slow cooker so when it’s time for dinner you just assemble and bake the enchiladas.

I suppose I could have cooked the chicken and salsa on the stove, but why do that when the slow cooker is so hands-off and, well, just easier? Enchiladas have a tendency to be a little high maintenance, but this slow cooker/oven hybrid makes this recipe just a little more weeknight-friendly.

For this slow cooker recipe, there’s no precooking required – all of the ingredients go straight into the slow cooker. Cook them all on low for three to four hours.

After the chicken and salsa have simmered together, remove the chicken from the slow cooker and shred it.

For the salsa, I like to puree it with my immersion blender. You can do this right in the slow cooker.

Roll the shredded chicken in tortillas and place them in a baking dish. Pour the salsa verde all over the top. Add some shredded cheese and that’s it!

Bake the enchiladas at 350°F for 30 minutes or until they are bubbling hot. Garnish them with chopped cilantro, diced red onion and sour cream for serving.

You can assemble the enchiladas up to a day in advance and keep them in the refrigerator to bake later. Since they’ll be cold, you’ll need to add a few extra minutes of baking time.

Make this for dinner with a batch of margarita wine spritzers and some chips and salsa on the side. You won’t regret it, I promise. 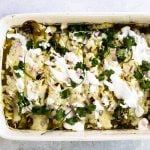 Chicken enchiladas topped with a flavorful salsa verde, Monterey jack cheese, sour cream and red onion. The salsa and chicken cook in the slow cooker until the chicken breasts are falling-apart tender and once the enchiladas are assembled you can bake them right away or keep them in the refrigerator for up to a day.

Sometimes I get fancy and make a cilantro-lime sour cream sauce. Just combine 1/4 cup of sour cream, the juice of 1 lime, 1 teaspoon chopped cilantro, and a pinch of kosher salt. Drizzle over the enchiladas.

Make-ahead tip: You can make and assemble the enchiladas up to a day in advance and keep them in the refrigerator. Since they’ll go in the oven cold, you may need to add some extra baking time.

The nutrition estimate does not include the optional garnishes.

This post has been updated from the archives. First published in December 2017.