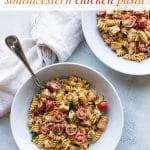 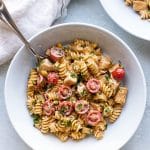 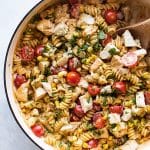 This southwestern chicken pasta, also known as summery ingredients tossed with pasta and chipotle cream sauce, is an addition to a roster of similarly-themed dishes. Guacamole, tacos, margaritas, burrito bowls, chipotle-flavored anything… I’ve doubled-down on the southwest-y/Mexican-inspired dishes and I have no regrets.

This installment of “chipotle flavor all the time” saga was originally inspired by a southwestern chicken pasta I had several times at a restaurant called Top of the Hill in Chapel Hill, NC. It’s been several years since I’ve been there and I’m glad I took the time to recreate it when I did before the flavor memory faded – it’s still one of my favorite pasta recipes on this here blog.

It’s full of pasta, chicken, fresh cherry tomatoes, sweet corn – all kinds of fresh flavors. The best part is the chipotle cream sauce. It’s a little smoky with a kick of heat that’s a nice contrast to the tomatoes and corn.

4 Steps to Make this Chicken Pasta

That’s it! A southwestern chicken pasta inspired by a restaurant but made at home in about 30 minutes ❤ 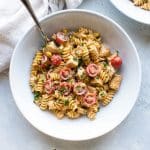 Tender chicken, corn, cherry tomatoes, and pasta all tossed together in a smoky chipotle cream sauce.

If you want to make it even easier, use shredded rotisserie chicken and skip cooking the chicken yourself. Just make the rest of the recipe as directed and add the shredded chicken at the end.

Look for chipotles in adobo in the Latin foods section at the grocery store. If you don’t like a lot of spice you might want to reduce or omit the chopped chipotle pepper and just use the adobe sauce.

For an extra smoky flavor, substitute the same amount of smoked cheddar cheese in place of the white.

If you leave the corn out at room temperature while you make the dish it will thaw out by the time you add it. Even if it’s still cold it will warm up quickly in the sauce.

Post updated from the archives. First published in May 2015.