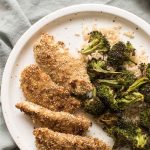 These sesame-crusted chicken tenders are quick to prep and a nice way to switch up a regular breaded chicken dish. The coating is made with sesame seeds and panko and bakes up nice and crispy in the oven.

I have to admit, until recently I’ve only used sesame seeds as a garnish so when I saw a recipe on Skinnytaste using them as a breading I was intrigued. I know I’ve had sesame-crusted things before at restaurants but it never occurred to me to try it at home. Spoiler alert: I’m glad I did.

If you’re wanting to switch up basic breaded chicken sesame-crusted chicken tenders are the way to do it. Sesame seeds have a distinct nutty flavor – they’re used a lot in Asian cuisine – and when you combine them with panko breadcrumbs you get a crispy coating for chicken. Chicken tenderloins, in this case, but you could also use boneless, skinless chicken breasts.

It’s a fairly quick recipe with most of the time spent waiting for the chicken to bake in the oven.

I didn’t stray too far from the original recipe (including the sides!) but did adjust amounts of some of the ingredients and added an egg to help hold the breading together. I like a little extra coating to maximize the flavor and texture.

Dip each tenderloin in the egg mixture, let the excess drip off, and then coat it in the breadcrumb mixture.

Lightly coat a baking sheet with cooking spray and place the chicken tenders on it in an even layer. Lightly spray the tops of each with the cooking spray.

The nice thing about chicken tenderloins is that they bake pretty fast. Pop them in the oven and bake them for 15 minutes at 400°F and then flip them over. Bake them for 10 to 15 minutes longer or until the chicken is cooked through.

I like to drizzle some sesame oil over the top when they come out of the oven – it smells amazing and adds a little more flavor.

If you have leftovers, they’ll keep for a few days but the coating may not be as crispy when you reheat it. Still delicious, though. 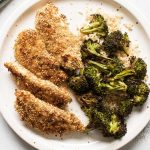 These sesame-crusted chicken tenders are quick to prep and a nice way to switch up a regular breaded chicken. The coating is made with sesame seeds and panko and bakes up nice and crispy in the oven.