Learn how to make veloute, one of the five French mother sauces. It’s a simple three-ingredient base sauce you can use to make all kinds of different dishes. It’s rich and velvety and very easy to make.

This post, recipe, and photos have been updated from the archives. First published in March 2015.

Have you seen The Hundred-Foot Journey? It’s a wonderful movie about a family that opens an Indian restaurant in a small French village just 100 feet away from a Michelin Star restaurant run by stately and proper women played by Helen Mirren. Of course, the neighbors clash and what follows is a story about food, culture, family, pride, love, and, ultimately, understanding. If you haven’t seen it, you must – it’s a great foodie film and it will leave you happy, inspired, and craving French food. At least it did for me.

In the movie there’s a lot of talk about the five mother sauces of French cuisine:

After watching the movies, I was totally inspired to learn all five myself. I was familiar with hollandaise and bechamel, having made both of them before, but the other three were a mystery. From there, an idea was born and I decided to learn how to make them.

So, first up, we’re talking about veloute – sounds so exotic and mysterious. At least that’s what I thought before I made it – after doing some research I quickly learned that there’s not much to it and all you need is:

Chicken veloute is the most common, but there is also fish, veal and beef veloute. For a darker sauce, use chicken stock. For a lighter-colored sauce use broth. You can, of course, use homemade stock or a good quality store-bought stock.

I have made versions with stock and broth and I prefer a lighter colored sauce so I mostly use broth, but you can choose what you like best. The most important thing is to use low-sodium broth or stock so you can control the seasoning.

All by itself, it’s not too exciting, but it can be used as a base to build so many different kinds of sauces:

Those are just a few ideas or you can get crazy and create your own derivative – veloute is like a blank canvas. A blank canvas with butter.

Here’s the great news: because it doesn’t have any milk or cream it freezes really well, which means you can make a decent-sized batch, store it in the freezer, and pull it out when you want a fancy sauce for your dinner. Making it ahead will save you about 30 minutes, so I think it’s worth it to make a bigger batch – you never know when a sauce craving might hit.

The other good news? It’s not hard to make – sure, it needs attention, but it’s not stressful and, once you get going on it, you realize you’ve probably made something like it before – have you ever made gravy? It’s a lot like that.

That’s it! Oh, wait – you should also strain it using a cheesecloth or a fine-mesh sieve. Straining the sauce gets rid of any little lumps and gives you a super smooth sauce.

How to Store It

I love to use this sauce as a base for Chicken Mushroom Supreme. I’ve also used a variation of it to make my Easy Chicken and Noodles, too.

Here are some other (not French) sauces I love to make, too. 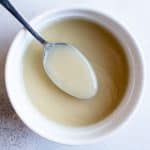 Veloute is one of the five mother sauces in French cuisine. It serves as a base for many other sauces, so make a batch and freeze it to have on hand! This recipe makes approximately 1 1/4 cup of sauce. It can easily be doubled.

I use a high-quality store-bought chicken broth for this recipe. I prefer a lighter colored sauce, but you can use chicken stock which will give you a darker sauce. You can also use this recipe to make beef, fish, or veal voloute using different kinds of stocks or broths.