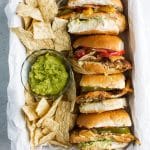 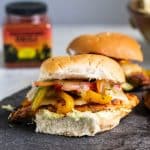 A simple chicken fajita marinade turns plain-old chicken into juicy and tender chicken burgers that are full of flavor. Top them with peppers and onions for a fun twist on chicken fajitas!

This post is sponsored by my friends at Chugwater Chili, otherwise known as the makers of the award-winning chili seasoning blend I used to make the chicken fajita marinade.

Fajitas are summer thing for me because what’s better than a quick-to-make dinner along with chips, salsa, guacamole, and cold beers when it’s hot outside? But instead serving up the chicken fajitas on a sizzling hot platter we’re going burger-style because burgers are a summer thing, too, and I always love a good mash-up.

And as much as I love the sweet peppers piled on the burger with a bit of melty cheese it’s the tender, juicy chicken breasts that are really the star of the show. So this post is more about the chicken fajita marinade – a simple marinade that turns a boring old piece of chicken into something a little more special.

Boneless, skinless chicken breasts are an ingredient that usually needs a little help to reach their full potential. Some people think they’re boring, but I see them more like a blank canvas. With the right preparation, a chicken breast can go from plain-jane to something memorable and, in the case of these fajita burgers it all starts with a chicken marinade.

I used Chugwater Chili Gourmet Chili Blend in this marinade because I’ve been pretty much obsessed with it since I started using on repeat for the last few months. It’s got a smoky flavor with just the right amount of heat and I use it in everything that needs a little kick of chili flavor.

I used to just mix up my own chili seasoning willy-nilly with whatever I had in my cabinet, but now this award-winning chili seasoning is my go-to. Plus, it’s made in my home state of Wyoming ❤ Learn more about this family-owned business and shop all of their products.

How to Make the Chicken Burgers

Once the chicken is marinated it’s time to make the burgers. I like to cook the bell peppers and onions first in a hot pan with some olive oil. For an extra kick, I cooked them with a sprinkling of the chili seasoning blend and a squeeze of fresh lime juice.

Before I cook the chicken breasts I pat them dry. All the smoky citrus flavor from the marinade will have absorbed into the meat and you don’t want a lot of excess liquid in the pan with the chicken otherwise it won’t brown well. So pat them dry and then place them in the same pan that you used to cook the peppers.

The chicken breasts cook up with a beautiful color but, more importantly, they cook up tender and juicy. I’d be happy with a plate of that chicken with a salad on the side, but we’re doing fajita chicken burgers today so let’s just take a couple more steps.

For a next-level experience serve your fajita chicken burgers with chips, salsa, and guacamole on the side. Don’t forget the icy cold beers! 🍺

Looking for more chicken breast recipes? Here are a few of my favorites plus a round-up of 29 chicken recipes from around the web… 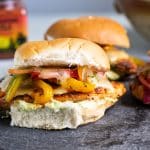 A simple citrus-chili chicken marinade turns plain-old chicken breasts into juicy and tender chicken burgers that are full of flavor. Top them with peppers and onions for a fun twist on chicken fajitas!

This recipe is sponsored by my friends at Chugwater Chili

For the Chicken Marinade

It’s tricky estimating nutrition for a marinade since it’s almost impossible to figure out how much of the marinade is absorbed into the chicken. I calculated the nutrition estimate assuming 1/4 of the marinade ingredients were absorbed since most of it is discarded and the chicken is patted dry before it’s cooked. Please keep in mind that this is only estimate.

I did not include the optional toppings and garnishes in the estimate or the hamburger buns since, depending the brand you use, nutritional values may differ.