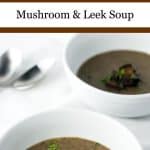 Easy mushroom and leek soup with a touch of cream.

When I travel for work I don’t often look forward to the food. Most of the time it’s hotel catering, served buffet style in large, impersonal ballrooms. Boring pasta for 200– need I say more? So my expectations were pretty low, food-wise, for this last trip I took to Scottsdale, AZ.
However, during the third day of the meeting, after sitting in a freezing cold conference room for four hours, I helped myself to some mushroom and leek soup that graced the buffet table during lunch. After a tentative first sip, I happily slurped up the rest, which was a simple concoction of portabello mushrooms, leeks, herbs, and cream. It was comforting, warming and (gasp) tasty, which worked wonders on my spirits after three long days of meetings, networking, and not-so-stellar food.
Soup is one of my favorite things to make so I had to try out my own version after returning home. I started by chopping up a medium leek, a couple of garlic cloves and a medium-sized onion. I cooked them over medium heat, in a large pot, with a few tablespoons of olive oil just until the veggies started to soften. I tossed in two chopped portabello mushroom caps and continued cooking it all until the mushrooms released their moisture and started to brown.
I next added some chicken stock (you could also use veggie stock) pouring in just enough to cover the veggies by a couple of inches. I let the soup simmer for about 15 to 20 minutes. Using my immersion blender, I pureed the soup and then added a couple tablespoons of heavy cream and garnished it with a little fresh parsley before serving. 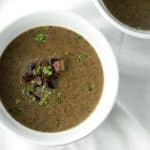 This mushroom and leek soup is easy to make and is so warm and cozy!