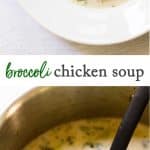 Warm and cozy broccoli chicken soup for two made with bacon, cream, and plenty of tender chicken and broccoli.

For a long time, I considered soup-making a kitchen project in the sense that you set aside time and make a big batch of soup to freeze for lunches and easy dinners. And while I still like to do that sometimes, in the past year I’ve come around to making smaller batches of soup. A batch that makes two or maybe three servings. That way, I’m not committed to a stack of frozen plastic containers that take up room in the freezer only to wonder months later – because I always forget to label things – what the heck is this brick?

So when a soup mood strikes I stop and ask myself do I want a lot or a little? Do I want a long-term commitment with this soup or just a couple of fun nights?

But beyond just basic soup commitment issues, there are other factors. This broccoli chicken soup, full of tender chicken and good-for-you broccoli, gets a dose of cream at the end. It’s a delicious addition, but not necessarily freezer-friendly because cream-based soups tend to separate and get funky when frozen. If I made a big batch I could freeze the soup without the cream and add it in when it’s thawed and warmed up, but I don’t always have cream on hand and so the frozen soup ends up buried in the freezer only to be excavated months later and tossed out. So, again, all roads led to a small batch of soup. In this case, a cozy couple of bowls of creamy broccoli chicken soup.