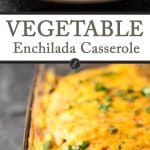 What I’m sharing today may, at first, seem like random musings about a vegetable enchilada casserole, pizza dough, and deep-seated beliefs, but I promise a common thread between them ties up nicely in the end.

It Was Supposed to be About Enchiladas

On Saturday morning I pulled my chair up to tell you about a vegetable enchilada casserole and two hours later I had approximately 1000 words that had nothing to do with vegetables, enchiladas, or casseroles. After I hammered out the last word and leaned back I realized I could sum up what I had written in far fewer words: I’m free! Beliefs I once thought held me hostage, are actually shackled in my mind by me. My own hands grip those beliefs tight and, if I choose, I can release them. The idea was like a splash of cold water on my face.

And I only share this tidbit because most of those 1000 words were about writing and letting go of the belief that “this sort of stuff doesn’t belong on a food blog”. It’s a belief that has cast a long shadow across the posts I’ve written over the years. I’ve always wanted this site to be more than just recipes brightly colored with phrases like, “it’s great!” and “you should make this!”. I want it to have more texture and be, well, more me. If I’m not squirming in my chair at least a little bit before hitting publish (like I am right now) then I know old beliefs have elbowed their way back in and are in my grasp.

But there should probably be a little something about enchiladas weaved in, so, on Saturday, I switched gears to melted cheese, tortillas, and black beans. But it was Feynman, with his “can we go to the dog park, pleeeaase!” face, who encouraged me to press pause on the words and, with that, our weekend began.

The enchiladas would have to wait.

So here I am on Monday morning, ready to share all the details about this comforting vegetable enchilada casserole, but first I have to tell you about pizza dough.

Saturday night, basking in the afterglow of my I’m free revelation, I mixed together ingredients for a basic pizza dough. It was an act of bravery that challenged my assertion that homemade pizza requires advanced planning, so therefore pizza delivery makes much more sense. Not long after I made the dough the old pizza beliefs disappeared as I pulled a bubbly hot pepperoni pizza from my oven. To celebrate, I poured a glass of wine and devoured it all while catching up on trashy TV. And there’s more! On Sunday morning, I rolled out a leftover blob of dough, brushed it with melted butter and sprinkled cinnamon sugar over the top. Thirty minutes later the rolls emerged warm and puffy from the oven and my house was pleasantly scented with cinnamon for most of the day.

It’s was a great (and freeing!) weekend.

And now we have a vegetable enchilada casserole, which is a break from a belief that rolling tortillas, with the filling tucked inside, is the only way to make enchiladas. What about stacking the tortillas in a baking dish with layers of filling and shredded cheddar cheese? It’s so much easier and far less messy to stack, as many people before me have discovered.

I may never roll another tortilla again.

I adapted the filling from a sweet potato tater tot hot dish recipe I made on an icy cold Monday night a few weeks ago. As the cheese melted in my old cast iron skillet filled and the warmth of sauteed vegetables filled my kitchen, I thought it would make a rich and cheesy filling for enchiladas, but instead of rolling I layered it all in a baking dish with tortillas and shredded cheese. So about a week ago, without even realizing it at the time, I kicked my old enchilada beliefs to the curb and baked a vegetable enchilada casserole. Poof! A belief was released.

It’s a good idea to let the casserole stand for a few minutes to ensure nice clean slices and don’t forget garnishes. While it baked I sliced fresh grape tomatoes and green onions, which sat atop a spoonful of sour cream. A sprinkling of chopped cilantro and sliced green onions finished it off.

And here are some rolled enchilada recipes from my past. I haven’t tested them using the stacking method, but I’m guessing they’d all take well to a lower maintenance assembly process. 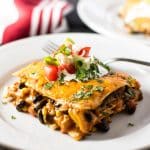 This vegetable enchilada casserole has a creamy, cheesy vegetable filling and, instead of messy rolled tortillas stuffed with filling, everything is stacked together in a baking dish. Easier to make and serve it’s everything you love about enchiladas without all the hassle.

Nutrition estimate does not include the garnishes