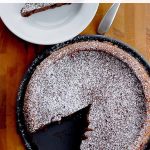 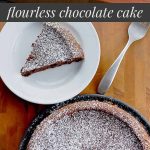 A rich and decadent flourless chocolate cake made with ingredients you probably already have one hand!

When you invite friends over to celebrate it’s important that the meal ends with a special dessert. To me, special means something rich and chocolaty, which is why I turn to this flourless chocolate cake recipe I’m sharing today. It’s my special cake that I make for very special occasions.

I discovered this recipe in a former life when I was working crazy hours at my job. And by crazy I mean that I went to work at three in the afternoon and arrived back home around midnight. I was often too wound up to go to bed so I would watch TV until wee hours of the morning, which is how I discovered reruns of Wolfgang Puck’s Cooking Class.

I loved that show because you actually learned something. Every episode focused on a specific ingredient or technique or both. When I started watching it I didn’t know much about cooking and I credit a lot of what I’ve learned to that show. I wish they still made new episodes.

I have to say the only good thing that came out of working that crazy schedule was all the things I learned from Wolfgang Puck. I’ve made many things from that show, but, by far, my most favorite is this cake recipe. I’ve made it many times and it’s my go-to dessert for any special occasion.

This rich and decadent flourless chocolate cake is a go-to favorite!