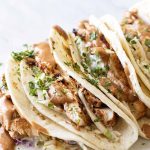 These chipotle chicken tacos are a little spicy, a little smoky and a whole lot of deliciousness. The chicken is marinated in a simple chipotle sauce and tucked into tortillas with a cool and crunchy cilantro-lime coleslaw.

Here are a few fun facts about these chipotle chicken tacos:

How to Make the Tacos

I usually go with one chipotle pepper, but you can add more if you want it extra spicy. You do you!

Pop it all in the blender and blend until smooth.

Divide the marinade and use half of it to marinate the boneless skinless chicken breasts. Save the other half to drizzle over the tacos.

The chicken only needs about 30 minutes to marinate and while it does you can make the slaw.

First, save yourself some time and buy a bag a coleslaw mix or a bag of shredded cabbage.

Combine the coleslaw with Greek yogurt, lime juice, cilantro and salt. Mix and pop it in the fridge while you cook the chicken.

Remove the chicken from the marinade and let the excess marinade drip off.

Cook the chicken on the stove in a large skillet or grill it over medium-high heat. If you opt to grill I recommend cooking the chicken over indirect heat so it doesn’t char too much.

Once it’s cooked through, let it rest for a couple of minutes and then thinly slice it.

Warm some flour tortillas, pile on some slaw, top it with the sliced chicken, and drizzle some of the reserved sauce over the top. Add a sprinkle of some chopped cilantro with a squeeze of lime juice if you’re feeling it.

Juicy, tender chicken wrapped up with all the crunchy slaw and spicy-smoky sauce. These chipotle chicken tacos are anything but ordinary. Enjoy! 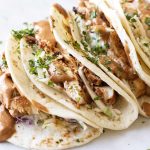 These chipotle chicken tacos are a little spicy, a little smoky and a whole lot of deliciousness. The chicken is marinated in a simple chipotle sauce and tucked into tortillas with a cool and crunchy cilantro-lime coleslaw.

Most likely, you will have leftover sauce. Save it and use it like you would enchilada sauce. It will keep well in the refrigerator for a few days.

The nutrition estimate does not include the tortillas.

The post updated from the archives. First published in May 2016.