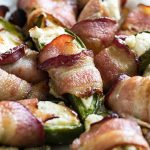 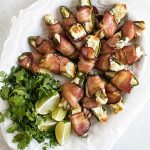 Jalapeno peppers stuffed with a zingy cilantro-lime cream cheese filling and wrapped up in crispy bacon. These baked bacon-wrapped jalapeno poppers are always a favorite appetizer.

Ah, jalapeno poppers. Denizen of the appetizer table and frequent snack choice for all sorts of get-togethers, particularly sports-focused gatherings.

These savory snacks – in this case, peppers stuffed with a cilantro-lime cream cheese filling and baked up with bacon – have come into my life in a big way in the last year as they are the go-to snacky-treat of someone I’ve been spending a lot of time with since last fall. Both he and his teen-aged kids love them and we’ve made batches of jalapeno poppers for birthday parties, Super Bowl parties, and office potlucks.

Until now, I haven’t always been a fan because have you ever bitten into a jalapeno and experienced a five-alarm fire in your mouth? I have, which is why I’ve mostly avoided eating whole jalapenos until now.

It wasn’t until I helped make batches of poppers earlier this year that I discovered that not all jalapenos are super spicy. The poppers we made were quite mild and so I got curious and did a little studying up on the matter.

How to Choose Jalapenos for Poppers

Here’s the deal on the spicy factor: the older a jalapeno is the hotter it is. Younger jalapeno peppers with smooth and unblemished skins are usually milder than ones that are older. You can tell one that has been sitting in the bin at the store for a while because its skin will be sort of blemished and flecked with white.

I learned this from a helpful article on Simply Recipes all about jalapeno peppers and since reading it I’ve had good luck picking ones that are smooth-skinned and blemish free that don’t burn my face off when I eat them.

As far as size, I like to choose peppers that are about 3 to 4 inches long for my bacon wrapped jalapeno poppers. This is a good size for an appetizer. Any bigger and they get a bit cumbersome. For this recipe, I used 10 jalapeno peppers.

How to Prep Jalapeno Peppers for Poppers

If there’s anything I already knew about jalapeno peppers – or any potentially spicy pepper, for that matter – is that I have to wear gloves when I prep them. I’ve burned my eyes one too many times when I’ve gone without gloves (even hours after handling them). So word to the wise: wear gloves when you make these jalapeno poppers. Even the mild peppers ones have spicy little insides.

Most of the jalapeno poppers I’ve had in the past were stuffed with just a simple cream cheese sans any bells and whistles. They are delicious, but for my version I wanted to step-up the filling a bit and make it a little more zingy. Here’s what you need:

The lime adds a nice pop of citrus flavor to the cheese and the honey gives it just a touch of sweetness both of which pair very nicely with the peppers and bacon.

How to Assemble the Poppers

Once you have your prepped peppers and cream cheese filling you are ready to stuff and wrap the peppers.

I love how the cheese filling gets a little toasty in the oven. There’s just enough honey to add a touch of sweet caramelization that’s delicious with the zingy lime and smoky bacon. Add some friends, some drinks and pass around the jalapeno poppers!

Want more delicious recipes? Sign up for the Weekly Newsletter! 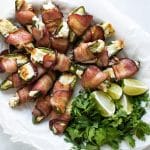 Oven-baked jalapeno poppers wrapped up in crispy bacon and stuffed with a zingy cilantro-lime cream cheese filling. These are the quintessential party food and always a hit.

Scared of spicy peppers? See the recipe notes for tips on buying jalapenos that won’t burn your face off!