Rosemary Potato Pancakes, or latkes, are crispy and flavored with fresh rosemary. They’re easy to make and are a delicious breakfast or brunch dish for weekends or holidays.

If you’ve had the chance to peruse the “breakfast” category on this blog you probably already know that I have a penchant for savory breakfasts, especially on the weekends. Sure, I enjoy muffins, pancakes, and other sweet starters, but my most favorite way to start the day usually includes eggs, potatoes, and bacon.

The first time I ever had potato pancakes or latkes, was at my best friend’s apartment when I was in college. I remember walking in to find her husband (well, back then he was her boyfriend) elbow deep in grated potatoes. I have to admit I was a little put off initially by all the oil popping and spattering all over the stove, but after my first bite, I was in love.

Despite falling instantly in love with potato pancakes I have never tried to make them myself. So this past week, after getting quite a few potatoes in our CSA box, I decided it was time to make a batch– for breakfast, of course.

After a little research on All Recipes, I came up with this recipe, which makes about a dozen. You can easily cut the recipe in half if you don’t want to make as many.

How to Make Them

Peel the potatoes and grate them. You can do this with a box grater or, and this is much easier, in a food processor with a grating attachment. It also works great for the onion.

Once they’re grated, squeeze as much water out of them as possible. I just pile the grated potatoes on a large kitchen towel, wrap them up, and give them a few good squeezes.

Crack the eggs into a large mixing bowl. Lightly beat them with a fork and then add the onion, rosemary, salt, pepper, and flour. Stir to combine.

Heat the vegetable oil in a large skillet over medium heat. Once it’s hot, drop two tablespoons into the oil to form one pancake. Use a spatula to gently flatten it into a pancake. Repeat this with more potato, but don’t overcrowd the pan. Cook them in batches so they get a nice golden crust.

Cook them until they are golden and crispy on the outside. Place them on a plate lined with paper towels to drain the excess oil. You can place the cooked potato pancakes on a sheet pan and place it in low oven to keep them warm.

How to Serve Them

Traditional potato pancakes are served with sour cream and applesauce, but I like to treat them more like a hash brown and top them with crispy bacon and a fried egg.

Rosemary potato pancakes are a fun breakfast treat for the weekend or for holidays. I hope you make a batch and enjoy them! 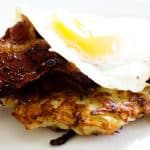 Homemade rosemary potatoes are perfect for a weekend breakfast – add a fried egg and crispy bacon for a complete meal!

You can grate the potatoes and onion with a box grater or in a food processor fitted with a grating attachment.

You can freeze the cooled potato pancakes for up to three months. Reheat them in the oven or air fryer for best results.