Tartiflette is a classic French dish of tender potatoes and crispy bacon that are baked together with a creamy melty cheese. It’s a wonderfully comforting dish for a cold winter’s night.

Last week it was French onion soup and this week it is tartiflette and all I have to say is that I am digging French food right now.

Is digging something still en vogue?

Should I even be saying en vogue?

Whatever, you get my point – I’ve been pulling a lot of inspiration from the land of baguettes, beef bourguignon, steak frites, and, now, tartiflette.

In other news, it’s been raining a lot here lately so I like the idea of warming up my kitchen with comforting dishes like tartiflette, which is basically a simple baked potato dish. It’s popular in the French Alps where people like a hearty warming bites after frolicking in the snow all day. We don’t get a lot of snow here in North Carolina, but the chilly damp weather is the perfect excuse to whip up hearty and comforting recipes like this tartiflette – I couldn’t resist all the melty cheese, crispy bacon, sweet onions, and tender potatoes.

Let’s face it: this dish has pretty much all my favorite things – including wine(!) –  and there was no way I wasn’t going to make it.

My version is a mash-up of two recipes: Anthony Bourdain’s and Felicity Cloakes’. I would have stuck with Mr. Bourdain’s from the get-go except he didn’t specify what type of potato to use, so I searched for guidance – for this recipe you want to stick with a waxy variety, which I learned after reading Felicity’s wonderful notes on the topic. I settled on Yukon golds – they hold their shape well and have a great texture.

Surprisingly, the dish didn’t come to be thanks to a French cuisine founding father but instead was created by the folks that make Reblochon cheese – the cheese of choice when making this dish. The story reminds me of how the chocolate chip cookie rose to fame and is, once again, a reminder that marketing people do rule this world. Unfortunately, there was no Reblochon to be found at my local grocery store (6/18 update: reblochon – a raw milk cheese – is very difficult to get in the US)  and I sure as heck wasn’t going on a cheese hunting mission on the Saturday after Christmas. Ugh, the traffic. Fortunately, Felicity addressed this potential problem in her notes so I had a few options – either brie or camembert. I chose brie. Moral of the story? You want to use a creamy melty cow’s milk cheese for this dish.

If you’re in need of a winter warmer this tartiflette is the answer – serve it as a main dish with a salad on the side and glasses of white wine, preferably the same kind you used in the dish itself. It’s cheesy, cozy, and comforting – a perfect dish for January. 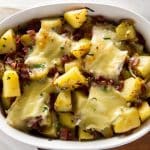 Tartiflette is a classic French dish of tender potatoes and crispy bacon that are baked together with a creamy melty cheese. It’s a wonderfully comforting dish for a cold winter’s night.

Traditional tartiflette calls for a lot of cheese – up to one pound – but I scaled it back for this version and used only 8 ounces of brie. To easily remove the rind, use a vegetable peeler to scrape off the rind – you’ll get most of it off without sacrificing any of the creamy cheese.