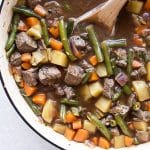 Vegetable beef soup loaded with tender potatoes, carrots, fresh green beans and chunks of tender sirloin. This hearty beef soup doesn’t need to simmer for hours since it’s made with tender sirloin instead of a tougher cut that needs a longer cook time.

In my world, soup season starts at the end of August as, by that time, I can barely contain my excitement for fall. My summer-loving friends will send me hate mail over this, but I can’t help myself. I love sweater-weather, cozy dinners, and bowls of soup like this vegetable beef soup I’m sharing today. I am definitely a fall/winter type of person.

I was ready to share this a month ago, but I held off because not everyone is running with arms wide open into the new season. I get that. But, seeing as it’s the end of September and the temperature here is in the low 60’s I think it’s time, my friends. Let’s bring on soup season, shall we?

What to Know about this Soup

All in all, this vegetable beef soup takes about an hour and a half start to finish. Most of it is hands-off time while the soup simmers.

Some Notes about Beef Stock

Store-bought beef stock has a bad rep and it’s mostly because there’s a lot of low-quality options that are loaded with salt and lack flavor. My best advice is to look for a brand that is organic and low-sodium for the best results.

How to Season the Soup

Salt can be tricky in soups because depending on the kind of stock you use the salt content can vary. Here’s how I season vegetable beef soup:

Vegetable beef soup loaded with tender potatoes, carrots, fresh green beans and chunks of tender sirloin. This hearty beef soup doesn’t need to simmer for hours since it’s made with tender sirloin instead of a tougher cut that needs a longer cook time.

Depending on the kind of beef stock you use you may need to add more or less salt, so be sure to give the soup a taste before you serve it and add additional seasoning if needed. If you are sensitive to salt, add less than what is listed in the ingredients – you can always add more later. 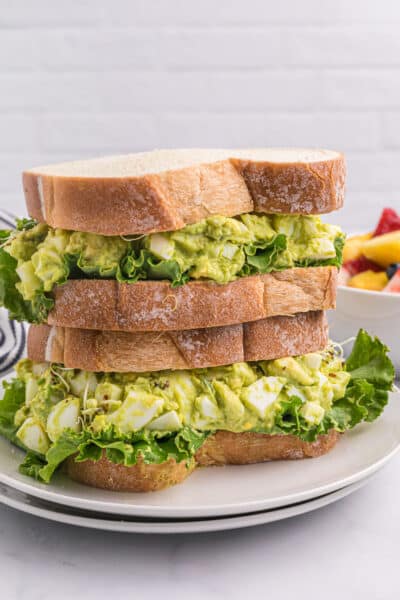