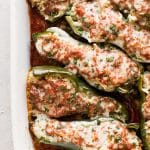 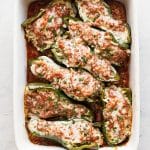 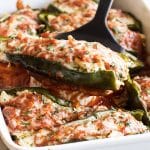 These southwest-style stuffed poblano peppers are easy to make thanks to some shortcuts! The peppers are stuffed with chicken and rice and topped with enchilada sauce and cheese. With this recipe, you don’t have to worry about overcooked or undercooked baked peppers – I’m sharing my best tips so they turn out perfect every time.

It’s probably no surprise to learn that I cook a lot and when you cook a lot you get used to a stuffed fridge cluttered with containers of leftovers and eating the same thing for three or four meals in a row.

So, it helps to have people to share the leftovers with – I’d like to say I share to be nice, but I mostly share leftovers because a) wasting food is sad and b) I want the feedback. Recipients of my leftovers are stalked and then peppered with hard-hitting questions of the soul-searching variety. It’s not enough to say something is good or bad, I need to know how it makes them feel. It’s tough work and a reminder that there is, in fact, no such thing as a free lunch.

Case in point: when I got a text about these stuffed poblano peppers that read, and I’m quoting here, “OMG those peppers were so F$&@ing good!” The feeling about the peppers just popped through the text message like a bolt. Hard-hitting follow-up wasn’t necessary – I knew I had a winner.

Some Notes about Stuffed Peppers

Stuffed peppers are tricky. Anytime you cook something “stuffed” you run the risk of the vessel that holds the stuffing – in this case, peppers – ending up either overcooked or undercooked.

In my research, which was mostly reading reader comments on the plethora of stuffed peppers recipes on the interwebs, under and overcooked peppers were the main complaint. The same goes for the stuffing. It’s a delicate balance and one I’ve spent quite a bit of time thinking about, which I tend to do. I’ve been thinking about stuffed poblano peppers for at least six months, so this recipe has been in the works for a while now.

Here’s what you need to know about these poblano stuffed peppers:

How to Prep the Peppers

How to Make the Filling

I took some shortcuts with the filling…

Can I use bell peppers?

Sure, if that’s what you want! Substitute your favorite bell peppers (red, yellow, and orange ones tend to be sweeter than green bell peppers) and have at it. I would still precook them as instructed in the recipe. As far as the filling, you may need more or less depending on the size of your peppers.

Can I use something besides chicken?

I have only tested these stuffed peppers with chicken and rice, but I think using cooked ground beef or ground turkey would work well with the rice, too. Just be sure to season the meat when you cook it (simple salt and pepper or add some chili or taco seasoning). 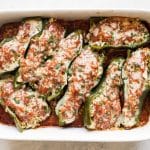 These southwest-style stuffed poblano peppers are easy to make thanks to some shortcuts like rotisserie chicken and quick cooking rice. Unlike other stuffed pepper recipes, you don’t have to worry about overcooked or undercooked peppers – precooking the peppers ensures they come out of the oven perfectly crisp-tender.