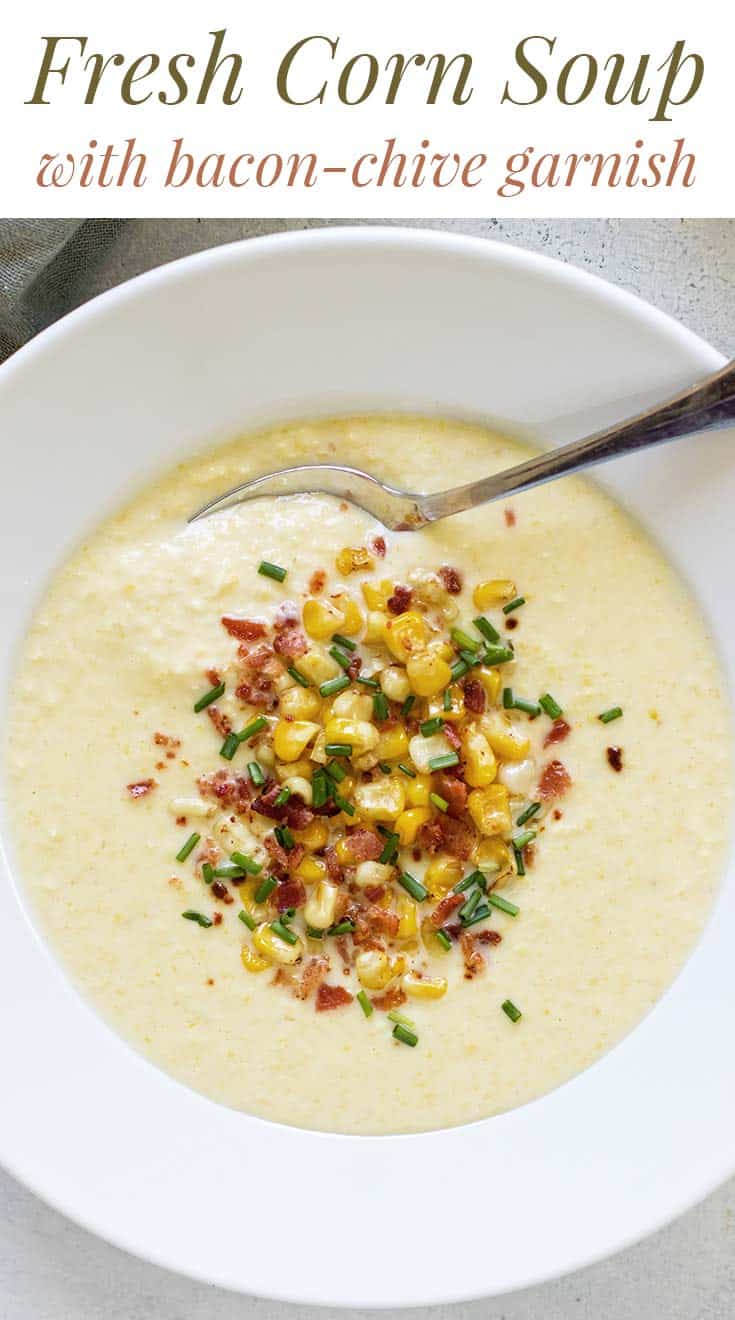 This simple corn soup is a delicious way to enjoy summer-fresh corn. The magic is in simmering the corn cobs in the soup so every last bit of flavor is extracted. Garnish with bacon and chives for a bowl that’s almost too pretty to eat.

This might be controversial, but I’m not really a fan of corn on the cob as a side dish. Well, I should say I love summer-fresh corn but I’m one of those “cut-the-kernels-off-please” people because it’s just easier to eat that way and there’s no corn-in-the-teeth issue to deal with.

But, to counter all of that negativity, I am a fan of this corn soup made with corn straight off the cob and a handful of other ingredients that combine to make the freshest, summery soup ever. Pretty to look at and easy to eat, not to mention delicious – this is how I like to do corn in the summer.

I first shared it back in 2014 after I discovered a recipe from the brilliant Dorie Greenspan, but since then I’ve simplified it a bit (the method and the ingredients) and now make it the way I’m sharing today.

Use the Kernels and the Cobs

What I love about this soup is how it’s made – you use both the kernels and the cobs so the soup is infused with fresh corn flavor.

Once you’ve cut the kernels from the cobs, saute them with onions and garlic. From there you add some whole milk and water and then you plop the cobs right into the pot to simmer with everything else. It’s like adding a flavor booster.

Of course, you don’t eat the cobs – you toss them once you’ve extracted their flavor before you puree the soup. It’s such a great way to take advantage of the whole vegetable and one of the thousands of reasons Dorie Greenspan is a genius.

It only needs 30 minutes to simmer and, once it’s pureed, just begs for a beautiful garnish. I love a dressed-up bowl of soup.

For the garnish, fry up some bacon and chop it up. Use the bacon fat to cook some of the corn kernels. I cook them until they’re crisp tender.

Slice some fresh chives and then pile all three on top of each bowl of soup. Fancy right? The combination pairs perfectly with the sweet corn soup.

I have only tested this recipe with whole milk, but I think 2% would work fine although the soup won’t be as rich. I wouldn’t use skim milk because you need some fat for flavor. For a really decadent experience add a splash or two of heavy cream.

Can I use frozen corn?

Can I make this in a slow cooker?

I haven’t tried it but I think you can easily convert this recipe to work in the slow cooker. I would reduce the water by 1/2 cup if you do and cook the soup for three to four hours on low. If you try it please let me know how it turned out!

How long will it keep?

Once made, it should keep well for two to three days in the refrigerator.

So, get thyself to the store and grab some of that summer fresh corn before it’s too late! You are going to want to try this corn soup and if you wait you might miss out. Summer won’t last forever, friend.

This simple corn soup is a delicious way to enjoy summer-fresh corn. The magic is in simmering the corn cobs in the soup so every last bit of flavor is extracted. Garnish with bacon and chives for a bowl that’s almost too pretty to eat.

Post, photos, and recipe updated from the archives. First published in July 2014.