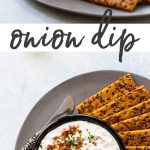 You don’t need to stand at the stove caramelizing onions for over an hour to make this onion dip – instead, pull out your slow cooker and let it do all the work for you.
This post was first published in 2010. The recipe, photos, and post have all been updated.

For a long time, I thought there were only two ways to make onion dip. Either stand at the stove for an hour or more, babysitting onions as they slowly cook down with the fear that they might dry out or, even worse, burn. Or, buy one of those French onion dip powder packets. The first is usually my preferred method, but given the time and focus commitment, I’ve made onion dip maybe two times in the last five years. Which is sad because onion dip is a classic and it tends to disappear fast when it’s offered as a snack-y treat at get-togethers. People love it.

A few years ago I used my slow cooker to caramelize onions because I wanted a way to make French onion soup on a weeknight and the slow cooker technique proved an effective way to caramelize onions without all the standing around at the stove. At the time I thought I would try the same for onion dip, but it kept getting shuffled to the back of the to-do list until a few years went by and then, just after Christmas, I finally pulled the slow cooker out to give it a go.

In all fairness, I’m not opposed to the old-fashioned way of caramelizing onions. When the right mood strikes, I enjoy babysitting onions on the stove, but when faced with preparing an appetizer for a holiday meal or snacks for a game-day get-together moods can fluctuate wildly and any romantic ideas about caramelizing onions go right out the window. That’s where the slow cooker saves the day (and mood). With a smidge of advanced planning, it’s as simple as leaving sliced onions with some butter in the slow cooker until they’ve melted down into a soft sweetness. From there it takes all of ten minutes to pull the dip together.

The best plan of action is to give the onions and garlic at least 10 hours in the slow cooker. Cooking them overnight works well so in the morning all you have to do is give them a quick chop and stir with the other ingredients. Pop the dip in the refrigerator until ready to serve, ideally at least a few hours in advance. 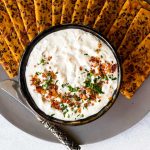 Nutrition estimates do not include the optional bacon garnish.