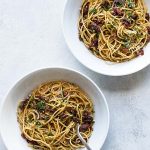 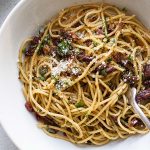 30-minute sun-dried tomato spaghetti with bacon is a quick and easy pasta dinner for busy nights. You only need a handful of ingredients and, once prepped, the dish is ready in the time it takes to boil the pasta.

Some of my favorite dinner recipes are hardly recipes at all. Instead, they start out as a collection of whatever odds and ends I have on hand that I toss together when the hangry feeling has taken hold and I need dinner rightnow. This usually happens at 6 pm on a Monday night.

So, there’s no planning, no drafting of a recipe card with the ingredients and amounts listed in an orderly manner that is then properly filed and scheduled for testing later in the week as is the case with a lot of other recipes I do.

Instead, efficiency is the goal. These experiments don’t always turn out, but sometimes they do as is this case with this pasta with sun-dried tomatoes, bacon, and Parmesan cheese.

This sun-dried tomato spaghetti is like my pasta with olive oil and garlic and Mediterranean pasta recipes – they started out as a scribble on a post-it note, too, but then somehow grew-up and become proper recipes worthy of typing up and sharing here with you.

So, I made it once and then made it a few more times tweaking the amounts until it only made sense to write it down and, at that point, I was in love with it, so here we are.

Here’s what to know about this easy spaghetti dinner:

Some might call it a “sauceless” pasta because the sauce is very light. Once you cook the bacon with oil-packed sun-dried tomatoes and add some fresh lemon juice just at the end, you get a very light sauce that coats the spaghetti when you toss it all together.

Here are some more quick and easy pasta recipes otherwise known as what to make when you’re hangry.

30-minute sun-dried tomato spaghetti with bacon is a quick and easy pasta dinner for busy nights. You only need a handful of ingredients and, once prepped, the dish is ready in the time it takes to boil the pasta.

I like to use California Sun-Dry julienned tomatoes packed in herb oil. I basically use half of a 7-ounce jar for the recipe (both the tomatoes and oil). 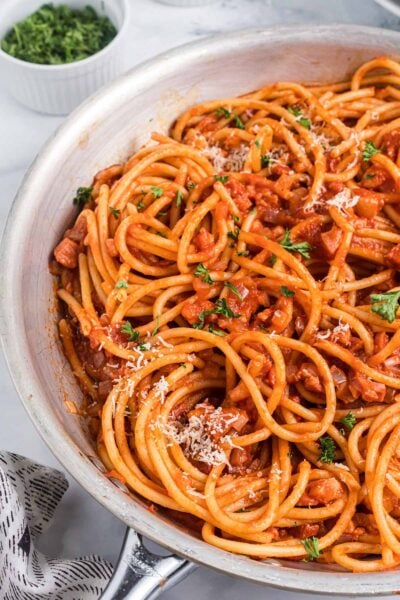 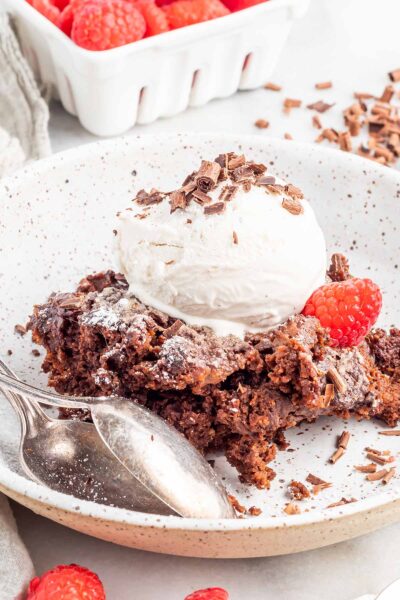 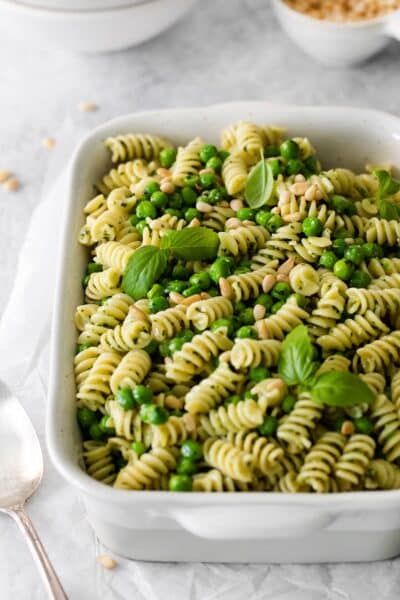 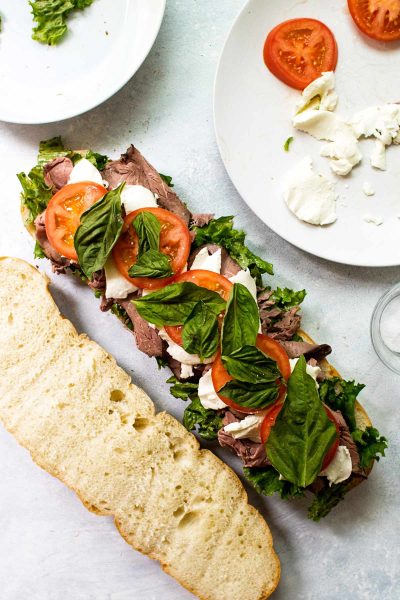