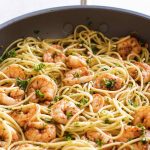 Cajun-seasoned shrimp tossed with pasta and a super light butter-lemon sauce. This is a quick and easy 20-minute Cajun shrimp pasta that you only need six ingredients to make. It’s a little spicy, smoky and so, so delicious. It should definitely be on your must-make weeknight dinner list.

If you’ve been following along for a while it’s no secret I’m a serious fan of simple pasta recipes. So much so, I once considered starting a pasta-only blog called “Hasta la Pasta” which makes absolutely no sense when translated, but I thought was cute and kitschy and, hey, it rhymes.

But this here blog, now in its 12th year (!), is more than enough work and so the other one will have to wait (forever, probably). So I’ll shall cut to the chase and tell you about today’s easy pasta recipe installment: It’s a six-ingredient, 20-minute Cajun shrimp pasta.

Like my ravioli with mushrooms and asparagus and Mediterranean pasta, it’s what some consider a “sauce-less” pasta although it’s a bit of a misnomer as there is a sauce – it’s just a very light one made with butter and lemon juice. I opted to make this without heavy cream so it’s not too heavy or rich.

And keeping it simple really lets the Cajun spice shine, which is basically the star of this pasta dish. It’s a Southern-style (specifically Louisiana-style) seasoning mix that’s a little spicy, smoky, savory and just all-around delicious.

20 minutes cook time, friends. That’s all the time you need to make this Cajun shrimp pasta. We can do this.

Different brands of Cajun seasoning will have different amounts of salt included. Mine had plenty, so I didn’t add any extra salt but have it on standby because you might want to add a few sprinkles depending on your tastes.

This is a speedy-quick recipe mostly because shrimp don’t need much time at all to cook. What you want to avoid is overcooking the shrimp while you wait for the pasta.

Get your pasta water going in a large pot and, once it starts boiling, drop the pasta in. Boil it according to the package instructions, which will take about 10 to 12 minutes. You can prepare the rest of the dish in the time it takes to cook the pasta.

Melt the butter in a large skillet over medium heat. Add the raw shrimp in an even layer and sauté them for about two minutes, flip them and cook them for another two minutes.

At this point, if your pasta is not al dente yet, take the cooked shrimp out of the hot pan and set them aside (turn the heat to low so the butter doesn’t brown or burn). When the pasta is ready, drain it and place it in the pan with the butter. Toss the cooked pasta around to coat it in the butter, add the lemon juice, parsley, and shrimp. Toss again and serve. Add a little more chopped parsley for garnish if you like.

What is in Cajun seasoning?

A variety of spices and seasonings like cayenne pepper, onion powder, garlic powder, paprika, and dried herbs like oregano, basil, and parsley. I use a store-bought mix, but you can make your own, too. Imma from Immaculate Bites has a homemade Cajun seasoning that’s easy to make.

How do you make creamy Cajun shrimp pasta?

If you want to make an Alfredo sauce or cream sauce for this dish you will need a few tablespoons of heavy cream and some Parmesan cheese (for the cream sauce leave the cheese out). Whisk them with the butter after you cook the shrimp (take them out of the pan). Once the sauce is combined, add the pasta, shrimp and everything else back to the pan.

How long do the leftovers keep?

I think it tastes best the day it’s made, but you can keep any leftovers in the fridge for a day or so. You may want to add a squeeze of lemon to freshen it up a bit.

Make this easy Cajun shrimp pasta recipe for dinner this week – you won’t regret it. 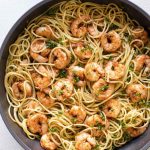 This Cajun shrimp pasta is a quick 20-minute dinner and perfect for busy weeknights.

Depending on how much salt is in your seasoning mix you may want to add extra to the recipe. You can always add a few pinches right at the end if needed.

Post updated from the archives. First published in May 2020.